How to keep using 3D in Photoshop for the future

Adobe is removing the 3D features from Photoshop. In this video. I’m going to tell you why and what you can do about it if you want to continue to use them. 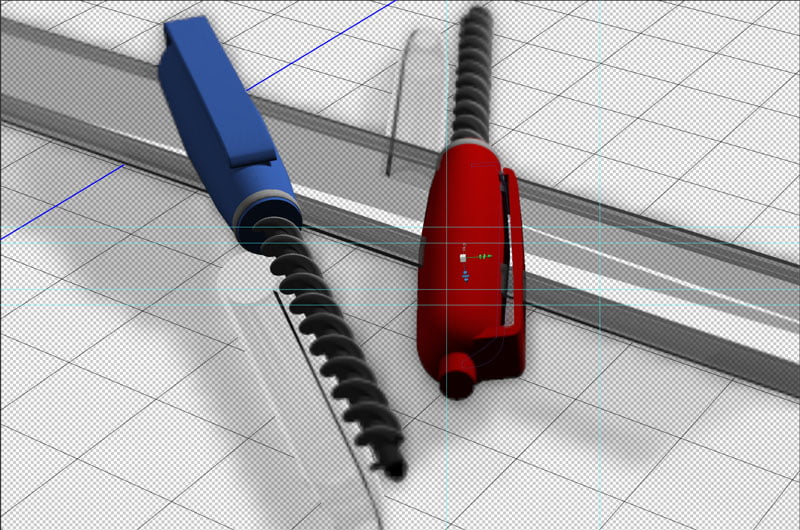 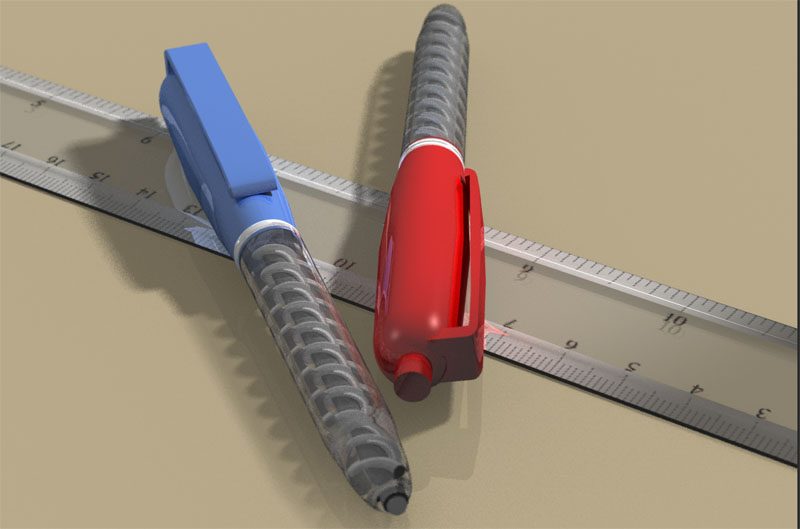 Let’s talk about 3D inside of Photoshop. So Photoshop Extended back in CS3, they added extended, which gave us 3D, video and the ability to work with medical imaging.

So recently, if you’ve launched Photoshop, when you go up and you change your workspace to the 3D workspace, you’re gonna get this message. 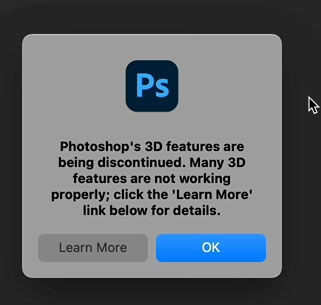 if you want to read Adobe’s official documentation, click the Learn More button. But let me summarize it for you.

Adobe’s 3D is built on OpenGL. A few years ago, GPUs became very popular in computers and open GL was an API that was used, which is cross platform.

That means that what works on Windows works on Mac.

But over the years the different platforms have started to develop their own Direct X with Windows and of course, Metal on Mac. 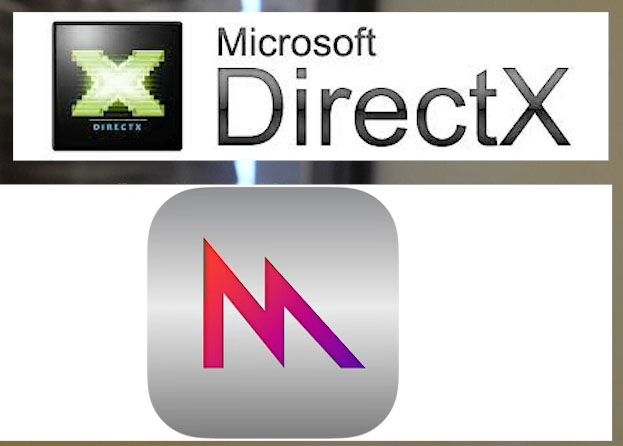 Because of this, a lot of Open GL is becoming obsolete.

Adobe is faced with two options.

2. just yank them out and have these barely functioning features gone.

Obviously, Adobe is choosing the second option. But read on to see what you can do. 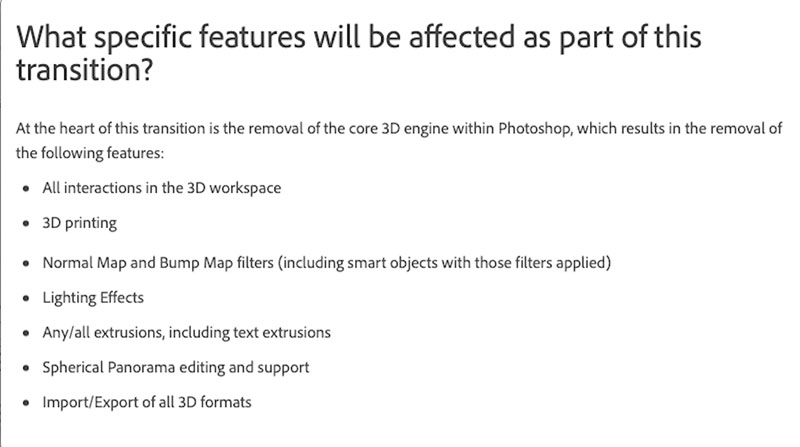 What will happen to your 3D Photoshop files?

Future versions of Photoshop that don’t have 3D tools will still be able to open Photoshop files that have 3D content.

Photoshop will rasterize the appearance of the file (unless you manually rasterize that layer), it’s going to remain a 3D object, but you’re not going to be able to manipulate it. You can just treat the 3D layer as a regular layer.

You can open it in an earlier version of Photoshop and it will work like normal (for a time) you’re still going to have access to that 3D object. It’s still going to work.

Now they’re going to remove the ability to import or export 3D.

They’re going to remove the all the 3D tools.  VR 360 will be gone. The ability to do 3D printing will be gone. And sadly, they’re also removing the lighting effects filter. 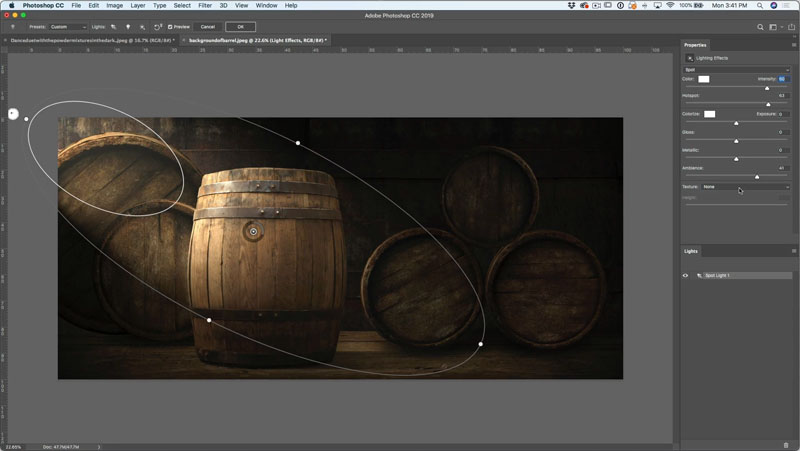 Now, the sad thing about that for me is a lighting effects was not originally GPU dependent. It was actually built as a separate plugin, which has been in Photoshop for many, many years. Then when things started moving to the GPU, they built a new version, they did a 16 bit version of it and it sort of worked for a while and it stopped working. They dropped it to a 8-bit version, and a lot of you probably are very well aware that it’s very, very buggy because I’ve done some tutorials on it and sometimes it works and Sometimes it doesn’t.

This is the problem that Adobe is having.

What I really wish Adobe would do is go back and find the old version of that plugin before they completely rebuilt it to work on it and just put that back in there.

All of those features are going to be removed from Photoshop. So that gives you two choices.

1. Continue to work with 3D inside of Photoshop, or

2. Do something else. I’m going to answer both of those issues for you right now.

If you want to continue to work with 3D inside of Photoshop, this is what you want to do.

Click on the Photoshop menu: Photoshop>About Photoshop, you will see the version number. Currently version 22.5. 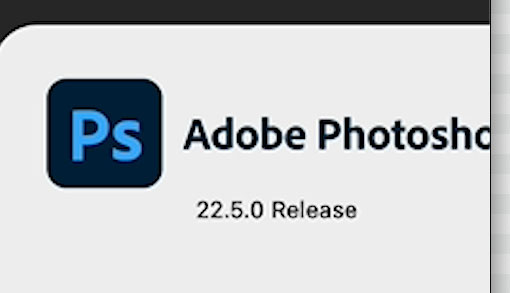 Now what you want to do is go up under Preferences>Technology Previews.

Under Technology Previews, you have the ability to deactivate native canvas. Now, if you’re going to be working a lot of 3D, this is a great option. Go to the Creative cloud application

Next to Photoshop there’s an ellipsis. Click it to see the Other Versions option 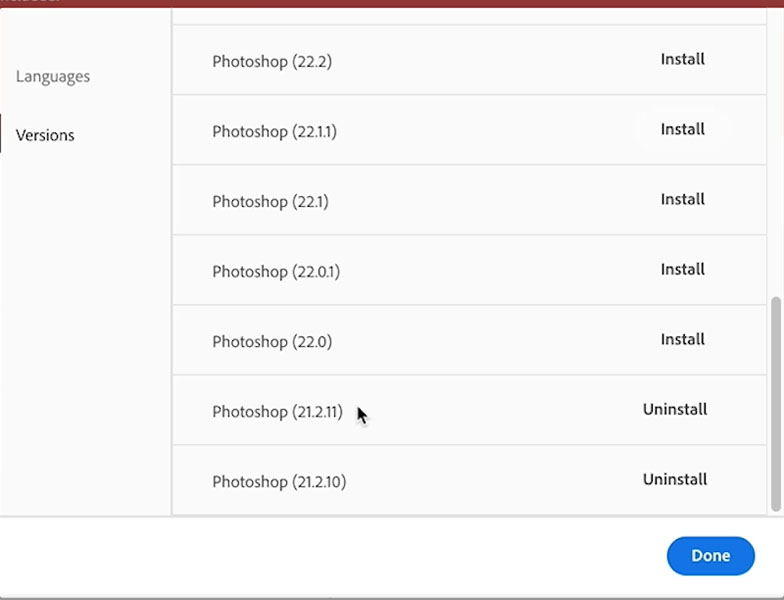 The reason we do this is because we can run two versions of Photoshop (On Mac, I haven’t verified this works on Windows).

Adobe says they’re going to support this for up to two years. So I’m not sure if that means it’s going to be updates or anything like that in there. These should run until apple or Microsoft do an update that kills Open GL (more likely to happen on Mac before Windows) So be wary of updating the operating systems on those machines.

Option 2, use something else for 3D

Okay, so what is the other option if you don’t want to run two versions of Photoshop?

And this is because Adobe is moving all the 3D.

If we click on the 3D tab.  Dimension is now Substance Stage, which is where we can put together 3D elements, render them 3D painter.

Substance is a company that Adobe acquired a while ago, and actually, it works, very well for texture mapping and for creating textures.

They’re building a suite of products, for 3D. Now, the downside of that is that it doesn’t come with your creative cloud. So if you’re not a huge, heavy 3D user, don’t get rid of Dimension. If you have Dimension, I don’t uninstall it because you might never be able to install it again.

If you want to use the newer, updated version Substance, its a separate billing and doesn’t come with your CC subscription. (I know, I know, don’t shoot the messenger). And this is how much it is. The Substance collection is essentially $50 a month. Right now, it’s $40 a month. 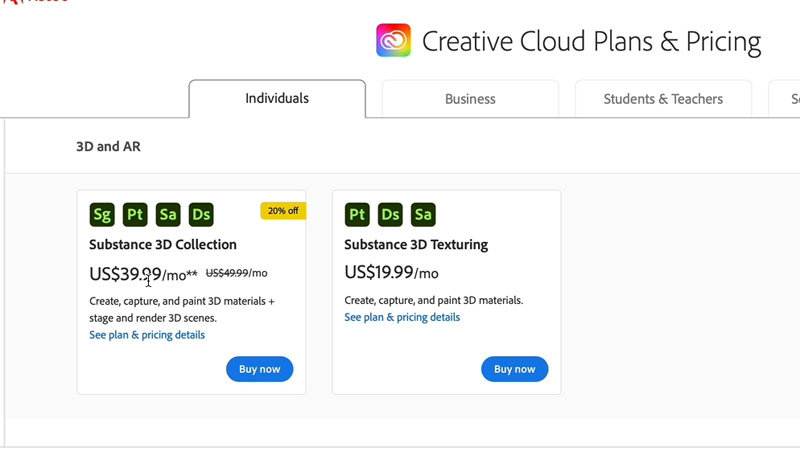 So to summarize, if you want to continue to do 3D, just make sure you have an older version of Photoshop installed. But just remember, the writing is on the wall.

At some point they’re pushing this into Substance, which is going to be a separate subscription. Probably not too appealing to hobbyists who might move to Blender or DAZ, or another free 3D solution.

But now for people that are using 3D professionally, there’s a lot of good things there in Substance, and it’s worth checking out. Just really depends who you are and what you’re doing, whether or not you want to continue on this path.

So I hope this tutorial has helped you understand why they’re retiring 3D. And also, what you need to continue using 3D in Photoshop.

So anyway, let me know your thoughts in the comments underneath.

Hopefully this was helpful. And if you guys like this,  I’ll see you at the cafe.

The post 3D not working, How to keep 3D working in Photoshop as Adobe removes it appeared first on PhotoshopCAFE.